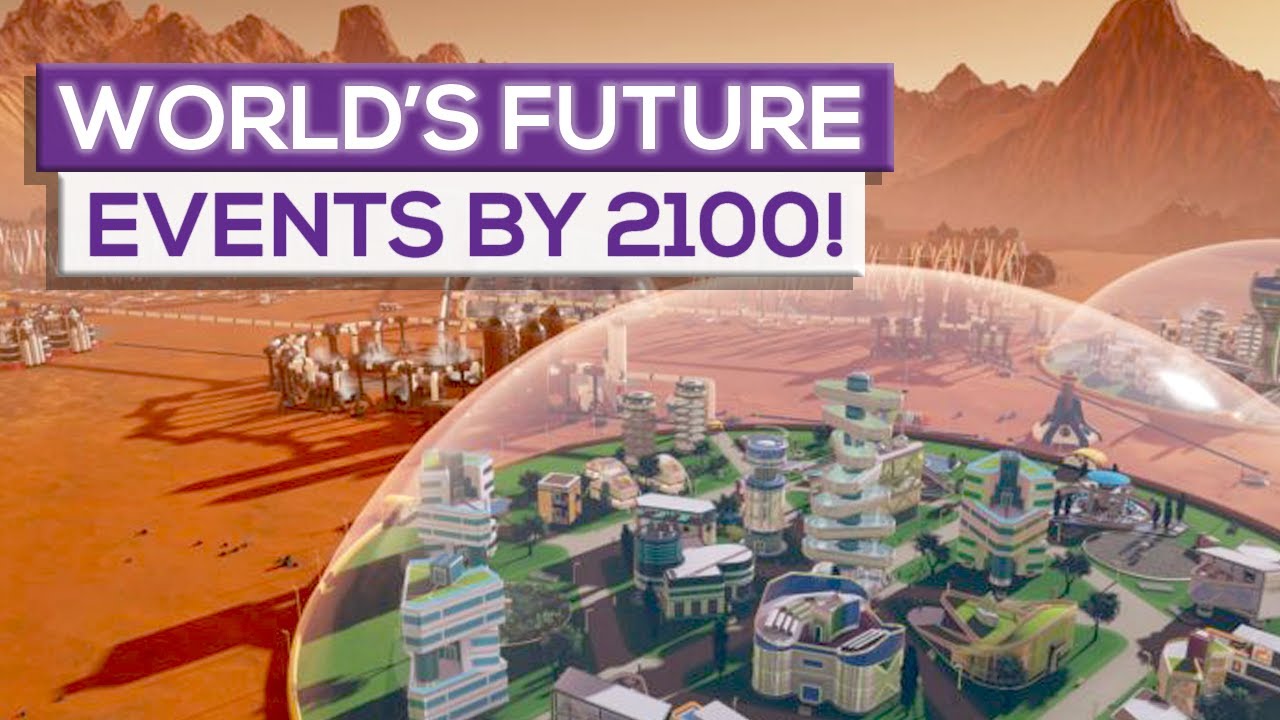 World’s Future Events By 2100!
From what the future will bring, to the events that could change our world forever, join us as we explore what events will happen by 2100!

Watch our” The World in 2050: Future Technology”

I know it’s hard to look at the future and say exactly what’ll happen. If you think about it, we’re in 2020, but if you asked people in 1920 what today would look like? Yeah, their answers would be VASTLY different. Don’t forget that this point in time was supposed to be the “sci-fi” future that a lot of people envisioned (we’re already past Back To The Future for example). So in truth, there is no real way of knowing what’s going to happen between now and 2100. However, there are things that we can predict, try to acknowledge as likely, and see what humanity might just accomplish.
So let’s start off with the very near future. Mainly, 2021. It’s in this year that the James Webb Telescope is expected to launch. So…what is it?
“The James Webb Space Telescope is the most ambitious and complex astronomical project ever built, and bringing it to life is a long, meticulous process.
So basically, the reason that we need this telescope/observatory is because without it, we will be unable to observe a large part of the universe that we can only speculate on right now with the other devices we have. P
. And so in the VERY near future, we could have a greater understanding of our universe. Which is perfect, because also in 2021 we’re allegedly going to get the first “space hotel”.
No, really.
“We are launching the first-ever affordable luxury space hotel,” said Orion Span founder and CEO Frank Bunger, who unveiled the Aurora Station to the world.

Another thing you can bet on is our desire to go back to the moon, which allegedly is going to happen in 2023. Which would mean that if successful, it would’ve been about 50 years between the current (2023) and last (1976) manned moon mission. Don’t get me wrong, we’ve launched MANY thing to the moon between that time period, but a manned mission to land on the moon? Not so much.

And now…for the event that I’m sure you want to talk about…getting to Mars. SpaceX is leading the charge on this one, as they’re endeavoring to send humans to Mars in the year 2024. Or more accurately, the mission to Mars will START in 2024, and they’ll likely land therein 2025.
The goal of this “first phase” of the mission is simple, he wants to get the people to Mars (call that Step 1) and then see how they’re able to interact on the planet, how well the cargo supplies hold up, and of course, set up the first “home” on the planet.

Elon Musk intends to have a livable base, generators that will run off of various power sources on Mars to ensure they don’t run out of power, and more.
. So obviously SpaceX, NASA and many others are working together to try and suss out all the kinks and possibilities to give this launch and mission one of the smoothest things around.
What we’re also hoping to be smooth is an event going on in 2029, less than a decade from now we’re going to have a close encounter of the asteroid kind. Specifically a rock called 99942 Apophis that was detected all the way back in 2004 and predicted to potentially hit the Earth in 2029. This has since been toned down to saying that it’ll pass by Earth just 20,000 miles above the surface. Which is still REALLY close, but barring something happening, we don’t have to worry about us getting hit.

Halley’s Comet is known as a “short period comet”, as it circles the confines of space, and then arrives back at Earth every 75-76 years. So if you’re lucky, you could see it twice in a lifetime.
Now, in 2069, another very important NASA mission is said to happen, but you can take this one with a grain of salt because of advances in technology happening right now. You see, NASA wants to send a craft to the place known as Alpha Centauri. Alpha Centauri is a place that you may have heard about because it’s a place where it’s said that a very Earth-like planet resides. The problem is that it’s over 4 light years away and in our quickest ship it would take tens of thousands of years to reach there…not fun.
I mentioned, there is a project being made right now that could send things to Alpha Centauri a LOT fast, and it’s set to launch in the next decade or so. Thus, if it works…we could have a look at the system a lot sooner. Time will tell.
From a look to the stars, to the remains of our world, 2095 (based on current calculations) will be a devastating year for Earth because of the fact that we’ll have cut down the entire Amazon Rainforest.
As for 2100, if we reach that point, our population will be over 11 billion (overpopulation)

Science & Technology
How to create YouTube channel on Android