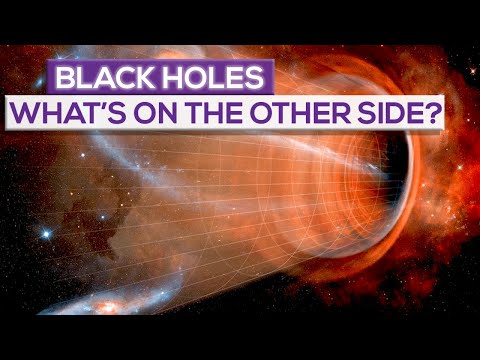 What’s On The Other Side Of A Black Hole?

From what they are, to where they might go, and beyond! Join me as we explore the question of, “where do black holes lead to?”

Before we dive into the potential pathways that Black Holes may have, it’s important to know exactly what they are. Because while you might have a loose definition as to what they are and what they do, they’re actually far more complex than you might realize. Which is why many people in NASA and other space programs are fascinated by them.
If you’re looking for a technical definition, this is how NASA describes Black Holes:
“A black hole is a place in space where gravity pulls so much that even light cannot get out. The gravity is so strong because matter has been squeezed into a tiny space. This can happen when a star is dying.”
This singularity as it is often called is a bit of a mystery in space, and for a very good reason. You see, black holes can form in large sizes, small sizes, and sometimes they don’t even need a fully fledged star to form at all! Which is scary in the sense that it means black holes can form in various ways.
Plus, since no light can actually escape them, it means that they can’t technically be seen by anyone. That being said, it’s easy to “see their work”, as the intense gravity of the Black Holes is enough to stretch objects from their “starting point” and slowly pull them to the Black Hole. This is known as spaghettification, because like a stretched piece of spaghetti, the object will get thinner and thinner until nothings exists but particles. And if you think that a Black Hole is limited in what it can absorb, you would be wrong. Very wrong in fact. If it is close enough, it’ll break down a star, a planet, multiple stars and planets at once, etc. It’s a question of range more than anything.
But there’s a catch to that, as you won’t be able to observe the spaghettification yourself. Why? Remember, no light escapes the void that is the Black Hole, so because of that, you’ll see the last known position of the object that light allows you to see. It’ll seem like they’re stuck in place and slowly going away until they’re gone. When in fact, they or it will be slowly pulled apart.
As we noted earlier, one of the main ways for a Black Hole to be born is to have a star collapse upon itself with such pressure that a Black Hole is a result. However, technically speaking, just about anything in the universe can become a Black Hole. How’s that for a scary thought?
It’s true though, and that’s one of the big “scaling” factors that you need to take into account when you’re talking about Black Holes. In fact, there’s actually a scarier thought that you need to consider, and that’s that black holes could technically be all around you right now. The only reason you’re not feeling their affects is that they’re not large enough to exert their own gravity.
The scale of a Black Hole is referred to as the Schwarzschild Radius. And becoming a Black Hole is impendent on you becoming so small and so dense that you can fit into this radius, and then potentially expand upon it. For example, a human being can become a Black Hole if condensed enough. However, the pressure needed to do that would not only be enormous, you could have to be shrunk 1 sextillion times smaller than a grain of sand. That’s REALLY small.

But that raises the question that we posed earlier, mainly, where do black holes lead to? I mean, if they can be of all sizes, and be anywhere from the size of a massive galaxy to the spec of sand on a beach, how can they lead to anywhere? How does that work? Would it work at all?
In the words of one scientist, “Who knows?”
“Falling through an event horizon is literally passing beyond the veil — once someone falls past it, nobody could ever send a message back,” he said. “They’d be ripped to pieces by the enormous gravity, so I doubt anyone falling through would get anywhere.”
Allow me to back up a little bit. Remember the whole “spagheticfication” thing I was talking about earlier? Well, the place that you would be “stretched to” is the horizon line of the black hole. Think of a black hole like a funnel. The big end of the funnel is the black hole that you “see” in space, and the rest of it is the core of the black hole that is hidden beneath its intense gravity. Now, if black holes DID lead somewhere, then like the funnel, you would have an access point through the core that you could go to. You get it?
The problem here is that most scientists believe based on their understanding of black holes that a horizon line is what awaits you at the end. So if you think about the funnel again, think about pinching the back end of it so that nothing could get out of said funnel. That’s what a lot of people think is in the center of a black hole, a literal end point. Which would be a problem for those who think it would lead anywhere…because it wouldn’t. It would end, o

Science & Technology
There May Be More Than 36 Alien Civilizations In The Milky Way!