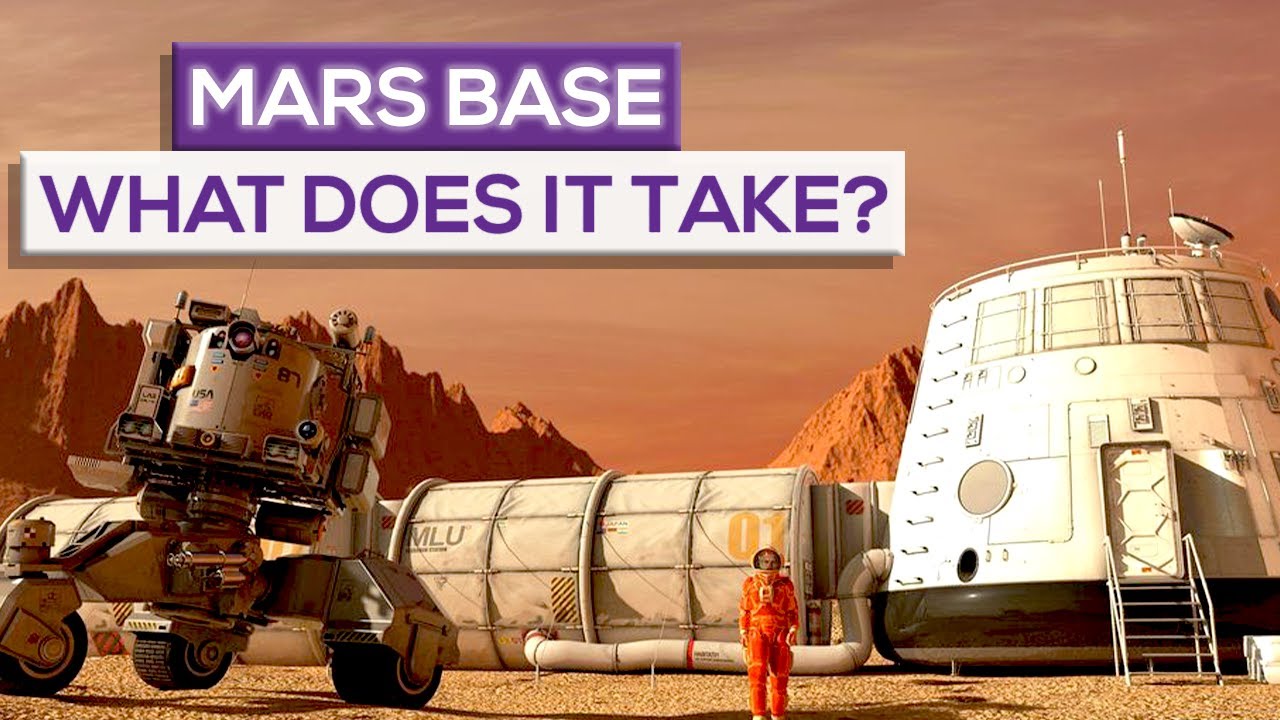 What It Would Take to Build A Mars Base!

From getting there, to setting up a base that is functional, to slowly getting the place up to detect for a larger colony, and more! Join me as we explore what it would take to set up a base on Mars!

For many decades now, humanity has dreamed about on another world. Whether it was a distant world in another galaxy, or just making colonies on all the worlds and moons that made sense, we’ve gone and envisioned all kinds of futures for our race. And on a base level, doing so is kind of vital. The Earth is growing more and more populated, but our resources are slowly but surely going to wear out. So, we need to start setting up places outside of Earth for us to inhabit.
The two best options at present are the moon and the planet Mars. And believe it or not, both the moon and Mars have plans in place to not just put people back on its surface, but, to potentially set up very large and functional bases for us (that’s humanity) to live on. But doing so is no small feat. While there have been many missions to the moon, they’ve only been for historical and research purposes. And even with it being MUCH closer to the Earth than Mars, setting up a colony there is not going to be easy. Yet, if you were to ask NASA, SpaceX and a whole bunch of other agencies what the main goal is for the 2020’s, you would get “We’re going to get people to Mars to start building a colony.”
A noble goal, but one that is going to be fraught with problems and will not be easy to get off the ground. But just so we can prove this to you, let’s break down everything you would need in order to make just a basic base on Mars.
First and foremost, you don’t just send people to Mars and hope that they are going to make it, that would be catastrophic on all counts. Which, thankfully, the appropriate space agencies aren’t aiming to do. Whether you look at NASA or Space X you’ll see that there is a “setup mission” that will happen before the first batch of colonists even arrive.
The point of this setup mission is simple, it’s going to dump a wide variety of items for the group to use when they arrive. Think of it like airmailing a package to a vacation spot you’re going to be going to. In this case though, that “package” will likely be a small base where the group will live for the first 9 months (more on that later), a large series of supplies, potential vehicles, generators, and more.
You might wonder why they’re going to outfit all of this stuff on a setup mission versus just putting it on the craft that has the group themselves. The reason is time, money, and weight. The more stuff you have to put on a craft, the more risk you’re taking that something is going to go wrong. Not to mention endanger the lives of the crew, as well as slow down the craft.
Even with some of the best minds working on it, a journey to Mars is going to be SLOW. Thus, launching a setup mission to get the equipment there is a good first move because A) it shows we really can get to the red planet with a ship (which we’ve never done before). B) it shows that landing these very large items on the surface without serious damage is NOT impossible. And C) should the worst happen, we’re only losing inanimate objects and not human lives. Because the moment that happens, a lot of delays are going to happen, and the colonization of Mars will be likely delayed infinitely until people are sure that they can get to Mars safely
So all told, the setup mission is the first and most important thing…in a long chain of important things that needs to happen on Mars for a base to be setup.
Before we dive even more into the base on Mars scenario, be sure to like or dislike the video so we can continue to improve so we can make the best videos possible for you the viewer! Also, subscribe to the channel so that you don’t miss ANY of our weekly videos.
Alright, so let’s assume that we are able to do the setup mission, and the first group of settlers/researchers are able to successfully be on the planet, ok? What would be one of their immediate challenges?
One of the obvious ones is a notion of continual power. After all, to run a base, and especially a large colony, you need power. Now, the setup mission will be delivering a wide variety of generators no doubt. But that’s only a partial solution. You need a long-term one.
The notion of Solar Power has been floated around by many, and it could work. But, it’s problematic. Mars is known for having storms that’ll block out the sun for days on end. Plus, due to distance, the solar power we’d get is only 40% of the kind we’d get on Earth. That could still help, but it won’t solve everything. Likewise, wind and geothermal power…is a no go.
So what can we do? Well…there is the nuclear option. No, not a b*mb, but nuclear power.

Science & Technology
There May Be More Than 36 Alien Civilizations In The Milky Way!