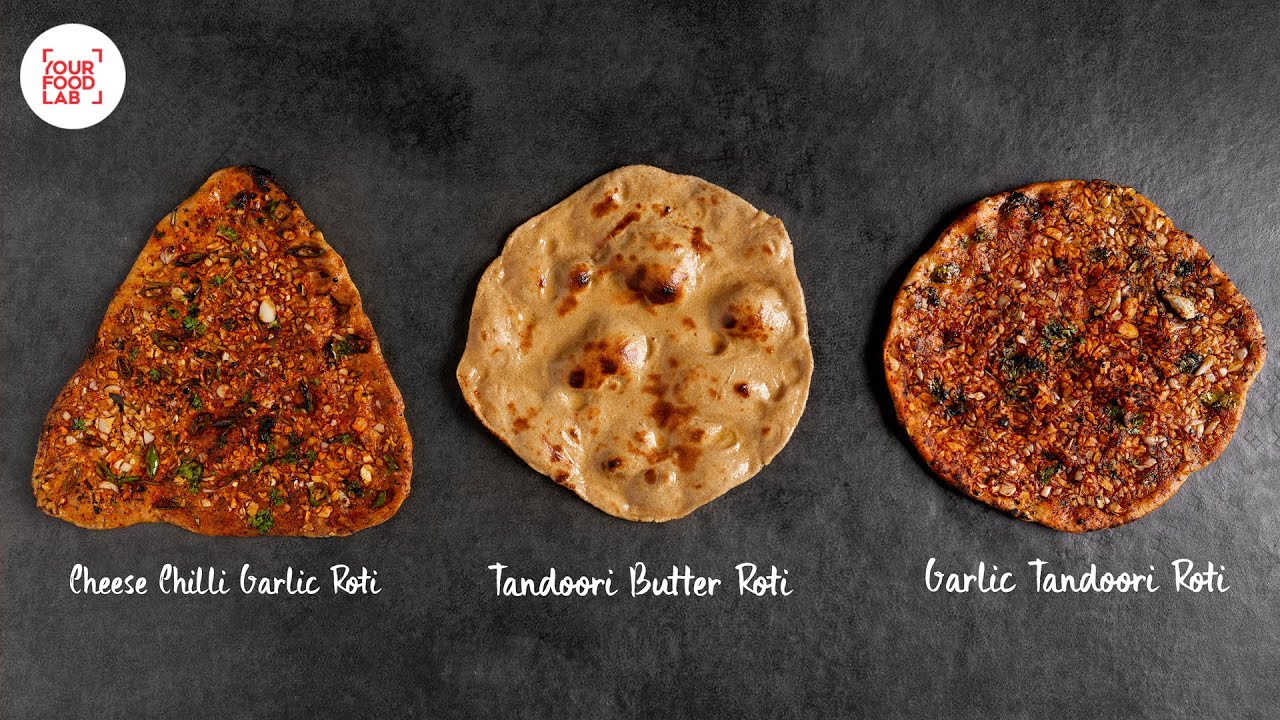 1. In a mixing bowl add the whole wheat flour, salt, oil & some water and mix. Add the water gradually until the dough comes together. You want to make a semi soft dough and knead it well until the dough turns smooth & a little pale white in color (Basically as you knead the dough the dough will lighten its color)
2. Now apply some oil on top & rest for a minimum of 30 minutes.
3. Once the dough has rested, make dough balls, remember the dough balls would be larger than the chapati dough balls we make at home.
4. One cup flour dough will yield around 3 rotis.
5. Now you can start making the rotis of your choice.

6. For Tandoori Roti plain & butter:
7. Set a tava on high heat. Very important to have an iron tava, you should not use a nonstick pan in any case because the roti would not stick on the pan.
8. Mix some water & salt and set aside.
9. You want the tava to be really hot before you stick the roti on the pan so before rolling out the dough set the pan on high heat & make sure it is well heated.
10. Now roll out the roti using some dry flour and you can either use your fingers & palms to make the roti or use a rolling pin. Roll out a semi thick roti. This roti will be thicker than your chapati but would not be as thick as a paratha.
11. Now apply the salt+water mixture on the back of the roti. Now stick the roti on the really hot tava, the water side would be sticking to the tava.
12. After sticking the roti to the tava, you should use your finger points to stick the roti onto the tava, ehat did does is that it prevents the roti from fluffing up completely and also gets stuck on the tava really well.
13. Now let some bubbles appear on the roti. Turn the tava upside down once the bubbles appear. Now keep some distance between the flame & roti and cook the roti on direct flame until brown spots appear and the roti also fluffs a lil bit more.
14. Once the roti has apt brown spots turn the tava again and remove the roti using a flat spatula.
15. The roti would have a really nice texture from both the sides just like a roti cooked in a tandoor.
16. Apply melted butter is you want to serve a butter tandoori roti or you can also serve it as it is. You can cook it a little longer on a lower flame to make some kadak tandoori roti if you like it that way.

For garlic tandoori roti:
1. Set a pan as explained before.
2. Now flatten the dough ball a little bit. Apply some dry flour only on one side.
3. Now apply some ghee on the top side. Add a pinch of Kashmiri red chilli powder & kasuri methi.
4. Now add the chopped garlic & fresh coriander.
5. Start flattening the dough ball so that the garlic mixture sticks to the roti really well.
6. You can now use your fingers & palm or a rolling pin to further roll out of the roti.
7. You want to roll out a thick roti.
8. Now apply the salt water on the back side of the roti & cook as mentioned before.
9. You can serve it with or without butter.
10. The rotis can be served with any gravies or also with some chutneys & schezwan sauce as an appetizer.

• Set a pan as explained before.
• Now flatten the dough ball a little bit. Apply some dry flour.
• Now roll out the dough a lil more than before & apply some ghee or oil.
• Noe add the grated cheese, garlic & chopped chilli.
• Now fold the roti into a semi-circle.
• Now apply some ghee again & fold into a triangle.
• Now apply dry flour on one side.
• On the top side now add some garlic, chilli, cheese, kasuri methi, Kashmiri red chilli powder & fresh coriander.
• Now flatten using your fingers & palms.
• You can use a rolling pin to further roll out the roti. The roti will be triangle shaped.
• Now apply the salt water on back of the roti & cook as mentioned before.
• You can serve it with or without butter.
• The rotis can be served with any gravies or also with some chutneys & schezwan sauce as an appetizer. You can cut it like nachos and serve as an appetizer.