Nirmala Sitharaman Press Conference LIVE Highlights: Finance Minister Nirmala Sitharaman announced the fifth and final tranche of the Rs 20 lakh crore economic package to help the economy tide over the coronavirus pandemic. Here are the key highlights of the announcements made by the minister so far:

• We need to now build an ‘Atma Nirbhar Bharat’. Immediately after lockdown was announced, we acted quickly with Garib Kalyan Yojana to reach out to those who needed food.

• Shramik special trains were started when it was possible for workers to move, states were requested to bring workers to stations, 85% cost was borne by the Central government 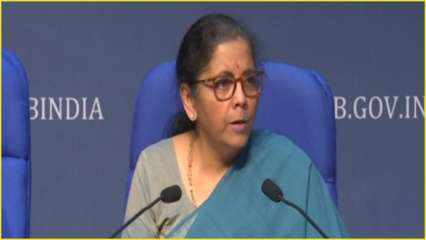 In a major development, Union Finance Minister Nirmala Sitharaman on Sunday announced an increase of Rs 40,000 crores in allocation for Mahatma Gandhi National Rural Employment Guarantee Act (MGNREGA) to provide employment boost. It is to be noted that budget estimate for MNREGA was Rs 61,500 crore

Addressing a press conference to announce the fifth and final tranch of 20 lakh crore economic package to fight COVID-19, Sitharaman expressed hope that the increase in MNGREGA fund allocation will help generate nearly 300 crore person-days in total. She also added that the Centre is committed to generating more employment opportunities for returning migrant workers in the monsoon season as well.

During the press conference, Sitharaman also outlined what the Centre has done in the past two months in light of the COVID-19 crisis.

The seven measures announced today were:

Finance Minister also highlighted the steps taken by the Centre in the health sector in the past two months since the outbreak of coronavirus COVID-19 pandemic, adding that “Government has committed Rs 15,000 crore for health-related measures so far for containment of COVID19 which includes Rs 50 lakh insurance per person for health professionals under the Pradhan Mantri Garib Kalyan Yojana.”

Mobile phones will now attract an 18% goods and services tax (GST) rate, up from existing 12%, after the GST Council corrected the inverted duty structure that was being faced by the industry. The Council, however, deferred rationalizing the tax structure of other products such as fertilizers, man made yarn, fibre and footwear among others, to the next meeting.

Some states including West Bengal had cautioned against increasing the tax rate on these products citing the weak economic situation of the country and the impact of the Coronavirus outbreak.

Maintenance, repair and overhaul service providers in India have been given a massive relief as GST on the sector has been lowered to 5% from present rate of 18%, with provision of availing full input tax credit (ITC).

“Mobile phones and specified parts to attract 18% versus 12%. All other items, if there’s a need to calibrate the rates, to remove the inversion, we can take them up at future, examination of that can happen at a later time,” said finance minister Nirmala Sitharaman.

Among other decisions on rate changes, match sticks will attract 12% GST, rationalised from various rates, such as handmade matchsticks were attracting 5% while machine made were being charged at 18%. This will be effective from April 1, 2020.

The Council has asked Infosys to workout solutions for overhauling the GST Network by July 2020, instead of time till January 2021 sought by Infosys chief Nandan Nilekani. Nilekani will also be present for the next three GST Council meetings, Sitharaman added, to apprise the Council of measures taken and their impact on the overhauling.

Sitharaman added that a legal opinion will be taken on whether the Council can borrow and who will be the guarantor, for giving compensation to states, given the low revenue generation that was impacting cess collections. A special meeting of the Council will be called within two weeks after the Parliament session ends.