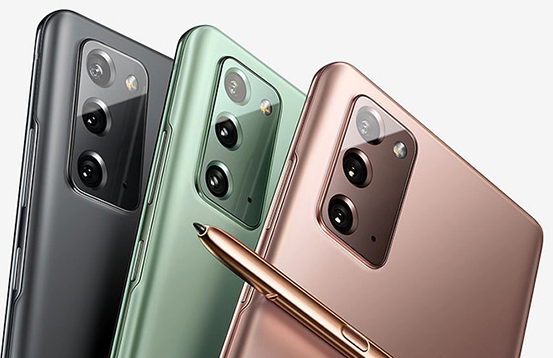 A new lineup of Samsung Galaxy phones is on its way and this crop looks stunning and, of course, more capable than ever before. The Korean electronics giant also teased a next-gen edition of its Fold, the Galaxy Z Fold 2.

Called the Galaxy Note 20 and the Note 20 Ultra, these smartphones are each aimed at different types of customers and, as you can probably guess, the “Ultra” moniker designates the higher-end of the two. They’re both more than capable but the Note 20 Ultra takes everything up an extra step – and let’s not pretend like they don’t have to do that. The competition between the handset makers is more intense than ever before and these latest iterations in the Galaxy line are proof positive of that.

DPReview reports that the Galaxy Note 20 will come with a 6.7” AMOLED display sporting a 20:9 aspect ratio as well as a 60Hz refresh rate with phones released in North America using Qualcomm’s Snapdragon 865 Plus CPU while the rest of the world gets Samsung’s Exynos 990 CPU.

In the camera department, we get three modules on the back of the phone, a 12MP F1.8 optically-stabilized wide-angle camera with 1.8μm pixels, a 64MP F2.0 telephoto (hybrid 3x zoom) camera with 0.8μm pixels, and a 12MP F2.2 wide-angle camera with 1.4μm pixels. On the front, there’s a 10MP F2.2 camera module with 1.22μm pixels. The Galaxy Note 20 can also capture video in 8K at “24fps in either 16:9 or 21:9,” DPReview states. The phone’s body is made out of Samsung’s trademark “Glasstic” while the display screen is made out of Gorilla Glass 5. You will have a choice of gray, green, or bronze with prices starting at $USD 1,000.

Are you excited about Samsung’s Galaxy Note 20 and Note 20 Ultra smartphones? Let us know your thoughts on Samsung’s new flagship in the comments section below.

Before you leave, head on over to our news section and check out our other articles here on Light Stalking.

Photography
How to develop film at home: The essential guide