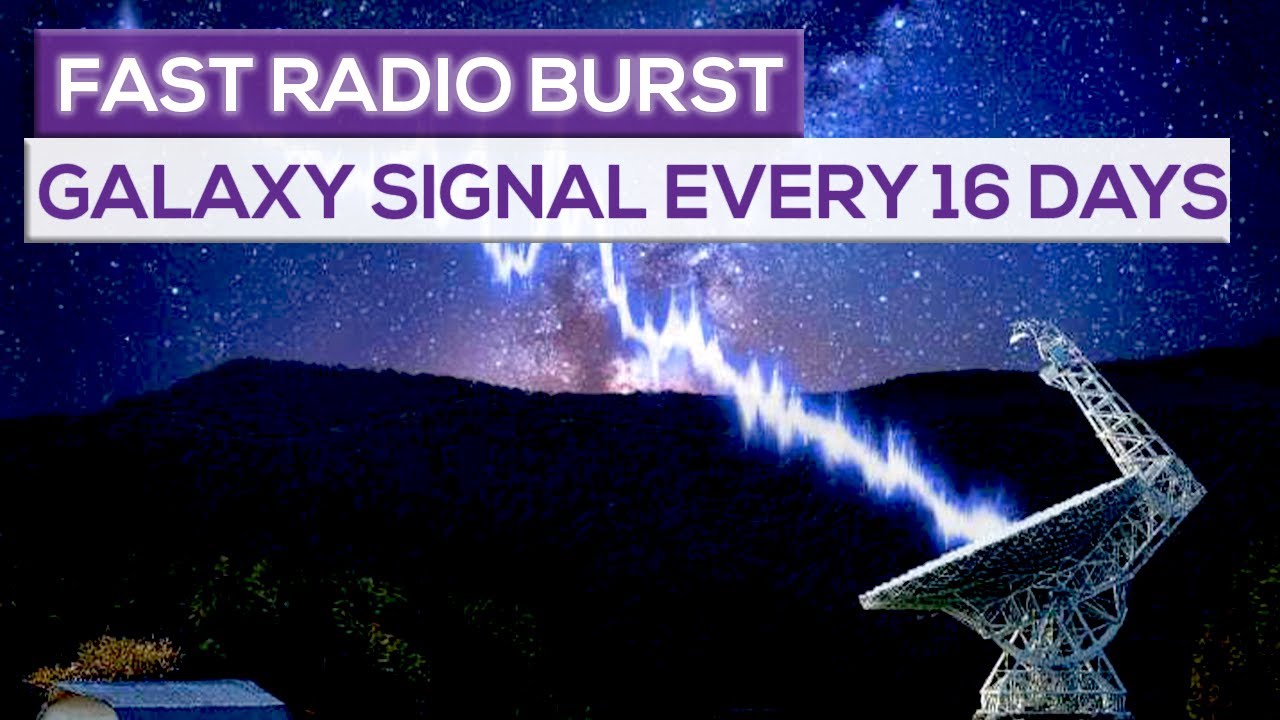 Mysterious Fast Radio Burst (FRB) Signal From Another Galaxy Is Repeating Every 16 Days!

From what this mystery sound is, to what it could mean in general and for all of mankind! Join me as we explore the Mysterious Fast Radio Burst (FRB) signal from another galaxy that Is Repeating every 16 days!

In space, no one can hear you scream, right? Well that may or not be true (Mythbusters actually tested this as a matter of fact) but the real truth is that in space there are TONS of sounds for us to listen to and observe and potentially understand. We have recorded the sounds of the sun, of various planets, and occasionally, outer space sends us a signal that we call a Fast Radio Burst or FRB that rings out and we have to discover what it is and what caused it to be formed.
“FRBs are hugely energetic flares of radiation in the radio spectrum that last just a few milliseconds at most. In that timeframe, they can discharge as much power as hundreds of millions of Suns.”
This kind of science is very intriguing and very important because of how it helps us understand space as a whole. But, the catch is this, these FRBs are meant to be very fast, and very singular in their message. Meaning that the “message” that they deliver throughout the stars is not repeated. It happens, and then it’s gone. That’s what makes it so much of a mystery at times because we have to figure out what series of events led to that sound.
Occasionally, there will be a signal that is found that sometimes repeats, but never is it regular, it’s just never happened…until…
…for the first time, astronomers have found a fast radio burst (FRB) that repeats on a regular cycle.
Every 16.35 days, the signal named FRB 180916.J0158+65 follows a similar pattern. For four days, it will spit out a burst or two every hour. Then it falls silent for 12 days. Then the whole thing repeats.
Astronomers with the Canadian Hydrogen Intensity Mapping Experiment (CHIME) Collaboration in Canada observed this cycle for a total of 409 days. We don’t yet know what it means; but it could be another piece in the complicated conundrum of FRBs.
Complicated indeed, because certainly this has never happened before. Last year, the CHIME collaboration announced they had detected a whopping eight new repeating fast radio bursts, bringing the then-total of repeaters to 10 out of over 150 FRB sources. And as of now, that’s been upped to 11. But even then, 11 out of 150 of these signals being repeated in some way, and then one and only one being repeated regularly and in a real timetable? That’s just weird, and it’s got a lot of people scratching their heads as to why this can happen, and how it happens.
But that’s the thing though, because this particular signal is a repeater that has a timeline, that means it can be further studied:
“The discovery of a 16.35-day periodicity in a repeating FRB source is an important clue to the nature of this object,” the researchers wrote in their paper.
Think about it, if it is repeating like clockwork, that means there’s a series of events going on that is causing the signal to happen at a regular frequency.
This could be the work of galactic objects, or something going on with a nearby star, there are some who even speculate that black holes could be a major player in all of this. But it’s still a bit unclear. However, there are a few things working in the favor of those who are trying to figure this out.
FRB 180916.J0158+65 is one of the handful of FRBs that have been traced back to a galaxy. It’s on the outskirts of a spiral galaxy 500 million light-years away, in a star-forming region. This means a supermassive black hole is unlikely, but a stellar-mass black hole is possible. Black Holes are still very much a mystery to us in regards to their power (which is massive and can destroy about everything) their cores, and all the effects they have on objects. Given that things about them are still being learned it’s possible that this signal is nothing more than a byproduct of its natural life. Or even the potential nearby stars natural lives:
“The single constraint on the orbital period still allows several orders of magnitude range in companion mass amongst known stellar-mass compact object binaries: from so-called ‘black widow’ binary systems, consisting of a low-mass star and a powerful millisecond pulsar whose wind ablates the companion (albeit typically with few-hour orbital periods), to massive O/B stars with highly eccentric companion pulsar orbits,” the researchers wrote.
But, that doesn’t mean the opposite couldn’t also be true…
Before we continue diving into all of this signal and other business, be sure to like the video and subscribe to the channel! That way you don’t miss any of our weekly videos!
This is the major problem with FRBs, there’s just too much we don’t know

Science & Technology
What If We Lost Gravity for 5 Seconds?