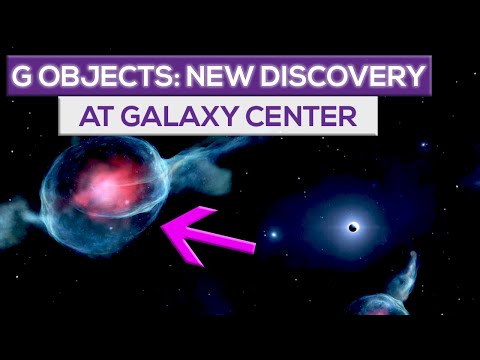 G Objects: A Strange New Discovery At The Galactic Centre!

From what they are, to what they could mean for both black holes and the Milky Way Galaxy, join me as we unravel the mystery of G objects.
So…what exactly are G objects? To answer that, we have to go to the center of the Milky Way Galaxy, you know, the galaxy we live in right now? Well, at the center of that is a black hole, or to be more accurate a “radio source” that we BELIEVE to be a Supermassive Black Hole known as Sagittarius A. We technically know it’s a black hole because of readings and such, but as many scientists like to note, if you haven’t seen it or touched it yourself…it’s all theoretical.
Anyway, like you would expect from a black hole, the area around it is dark (as black holes don’t let light escape and thus they make a black mass of space) and anything that would get near it would get sucked in. But over the last few decades, astronomers have noted that there are things actually orbiting the black hole, which really shouldn’t be happening. And yet, they are, and they’re acting like objects that have never been viewed before in space or anything else.
Thus, these objects were labeled, “G Objects”, and of these objects that we have found, there are 6. There could be more, but we haven’t found them yet, so for now it’s just six, and the first two of these six were actually found decades ago.
Here’s what happened, scientists were studying the black hole and over the course of many years realized that two objects seemed to be orbiting the black hole, and yet, they weren’t acting right. The first belief of these objects in regards to what they were gas clouds. Which if we’re being honest would make sense as gas clouds are littered throughout space, including one that has the chemical that is used to make alcohol taste better (no, really, look it up.)
But there were some problems with this theory. First among them was that these two different gas clouds were 100 astronomical units across (one astronomical unit is the distance between the Earth and the sun), which made it REALLY weird that something that size would be orbiting a black hole without issue. And as they looked closer, they noticed that the clouds were getting stretched out as they were getting closer to the black hole. So in many ways, these gas clouds were acting like something else made of gas…
“These objects look like gas but behave like stars,” said physicist and astronomer Andrea Ghez of the University of California, Los Angeles.
Since the find of G1 and G2 (the names of the two gas clouds), the team led by Ghez has been studying the center of the galaxy for 20 years! And through that, they found G3-G6, confirming that there were many objects orbiting Sagittarius A…for some reason. What’s even weirder if you can believe it is the orbits of these six objects aren’t uniform in the slightest, they are vastly different. No unlike the planets in our solar system having much longer orbits than Earth.
How different are they? Depending on the object they can range from 170 years to 1,600 years! And…yes, there’s more, there’s always more, they STILL don’t know what these six objects are! How’s that for a kicker?
We are getting clues though as to what some of them MIGHT be. For example, in 2014, the object known as G2 entered a period of its orbit where it was closest to the black hole, and when that happened, some observations were made:
“G2 is a dusty red object associated with gas that shows tidal interactions as it nears its closest approach with the Galaxy’s central black hole.”
Not just that though, as they observed it from that point to where it moved to next, scientists noticed that it was changing shape based on where it was near the black hole:
“We had seen it before, but it didn’t look too peculiar until it got close to the black hole and became elongated, and much of its gas was torn apart. It went from being a pretty innocuous object when it was far from the black hole to one that was really stretched out and distorted at its closest approach and lost its outer shell, and now it’s getting more compact again.”
So what does that tell us? What does this mean as a whole? Does it truly help us determine what G2 is, or what any of the other G objects are?
Before we answer that, be sure to like the video and subscribe to the channel! That way you don’t miss any of our weekly videos!
The answer to what the G objects may be might be simpler than you might suspect. Because it doesn’t necessarily have to do with what the G objects are per se, but rather, with where they are located!
Confused? I’ll explain. There are many kinds of stars in the universe, we’ve even talked about some of them here on the channel before, but one of those types of stars is Binary. Binary stars are defined as..
To that end, some scientists believe that the other G Objects are possibly also gas byproducts from fused Binary Stars.

Science & Technology
Can We Colonize The Moon By 2024?

Science & Technology
Will A Mask Really Protect You From Coronavirus? – Cheddar Explains

Science & Technology
The Most Advanced Military Equipment of the Future
© Blimpt 2020. All Rights Reserved