10 Least Crowded Places in India to Travel in Corona Times

The COVID-19 pandemic that spread like wildfire since last December has affected almost every country on the planet, and each one is likely to recover at a different rate. Among all the sectors that are reeling, it is the tourism and hospitality industry that has been hit the most due to border closures, travel restrictions, and lockdowns. These are unprecedented and challenging times in which safety remains the top priority, dreaming about a holiday is not that much easy and safe. But, some places in India are the least crowded and safe places to travel during this pandemic. Check the list of safest places to visit in India during this pandemic here. 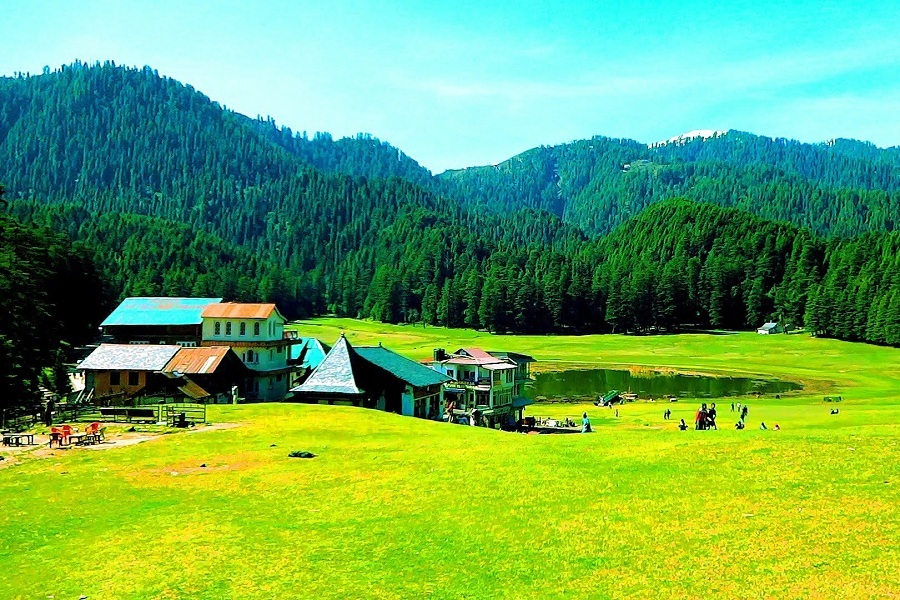 Away from the touristy towns of Himachal, Khajjiar, a tiny hamlet about 24 km from Dalhousie, is one of the safest places to visit in India during the Corona Pandemic as it has fewer infected people and experiences fewer crowds. Situated at an altitude of 1,960 m, the beauty of this pristine hill station lies in its rolling grassy meadows, the gorgeous deodar trees, cascading rivers, and limitless brooks. Trek or hike in the scenic environs, it’s blissful. Located amidst a huge grassy landscape, with cedar trees looming on all sides,  Khajjiar Lake is the top attraction in Khajjiar and also a great place for picnics, paragliding, zorbing, and horse riding. One can also enjoy the mesmerizing views of Mount Kailash from the lake on a clear day. Kalatop Wildlife Sanctuary and Khajji Nag Temple are the other important places to visit in Khajjiar as part of Himachal Packages. 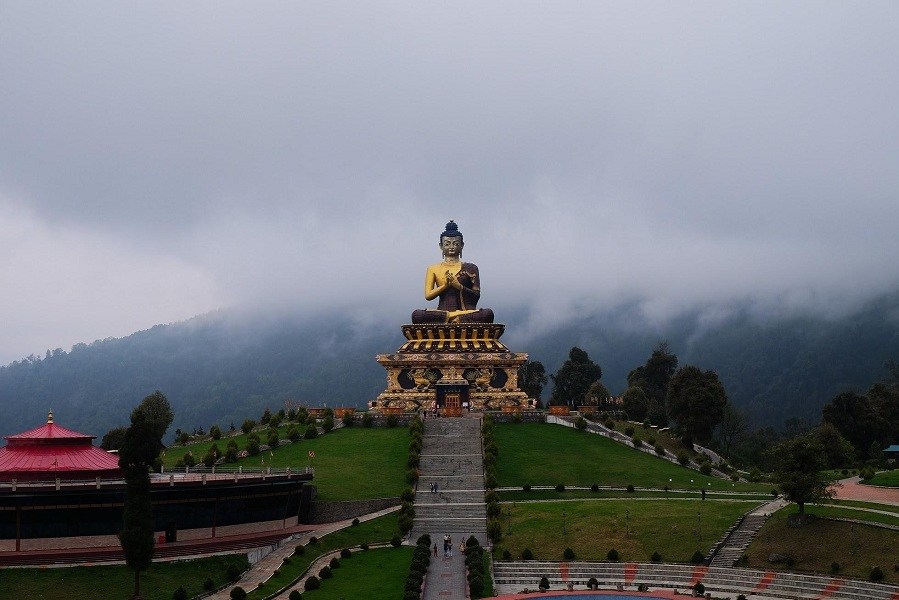 Believe it or not, but there couldn’t be a safe and stunning place to visit after this uncertain period than Pelling in Sikkim. At an altitude of about 2,100 m, Pelling is a wondrous hill station in northeast India and among the best serene places to visit in Northeast India as part of Gangtok Tour Packages. It is smaller and not as well developed, but it will leave you in awe with its prismatic beauty and mesmeric charm in the form of lush forests, gurgling rivers, serene lakes, ancient Buddhist monasteries, national parks, and exciting adventure activities. Besides, it is less frequented, more serene, and closer to nature which will sure to offer you the much-needed break from Corona. 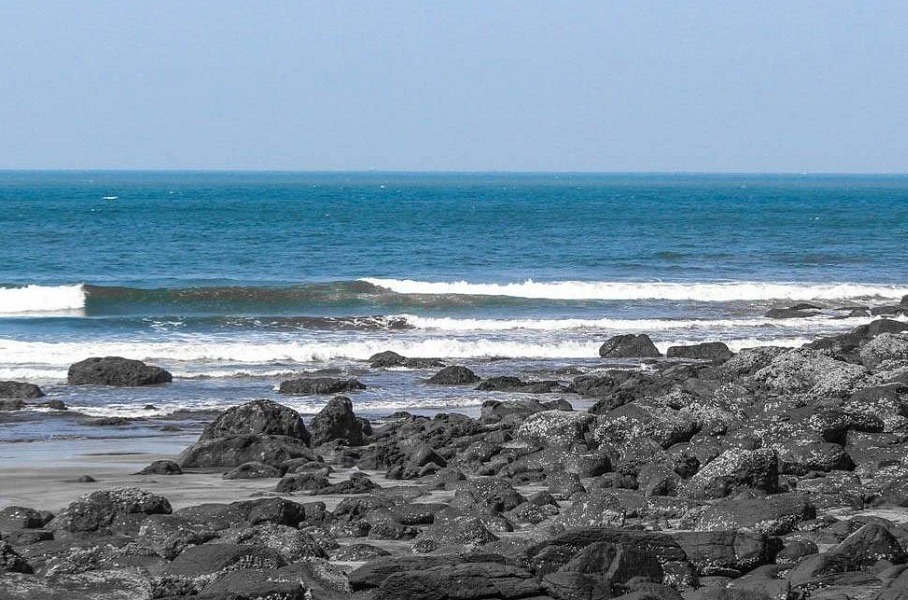 Serene, solace, and breathtakingly beautiful, the beaches of Ratnagiri & Ganpatipule on the coast of the Arabian Sea in Maharashtra are among the best places to visit during the Corona times. Surrounded by beautiful hills of Sahyadri ranges, Ratnagiri is one of the important ports on the Konkan coast. Though the town offers the most diverse attractions for tourists, the beaches in Ratnagiri dominate all. Mandvi Beach is the most popular beach in Ratnagiri. Pawas Beach, Ganeshghule Beach, Bhatye Beach, and Ganpatipule Beach are the other famous beaches to visit as part of Ratnagiri Tour Packages. Apart from the beaches, there are other tourist attractions like Ratnadurg Fort, Thibaw Palace, Gateway of Ratnagiri, Swayambhu Ganapati Temple, Vijaydurg Fort & Beach, and Jaigad Fort & Lighthouse. Ratnagiri is also the birthplace of the great freedom fighter Lokmanya Tilak. 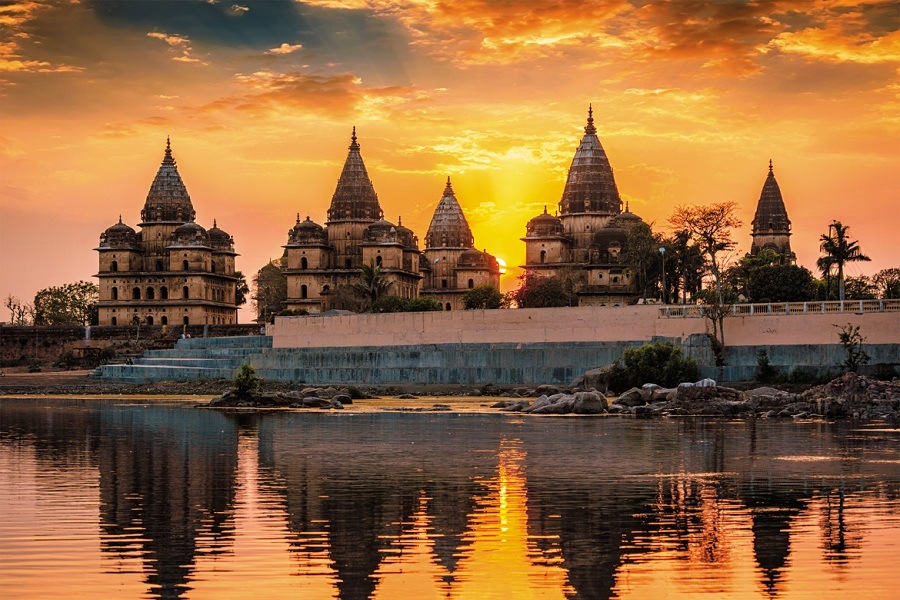 Orchha is a small town in Madhya Pradesh best known for its old appeal. Situated on the banks of Betwa River, the medieval city of Orchha was the capital of Central India in the 15th century, and is a town frozen in time. There are many temples, palaces, and forts located in Orchha. The main attraction of Orchha is the Orchha Fort complex, that includes Jahangir Mahal, Raj Mahal & Rai Parveen Mahal. Chaturbhuj Temple, Chhatris, Lakshmi Narayan Temple, and Orchha Wildlife Sanctuary are the other places to visit in Orchha. Rafting in Betwa River is one of the top things to do as part of the Orchha Tour Packages. 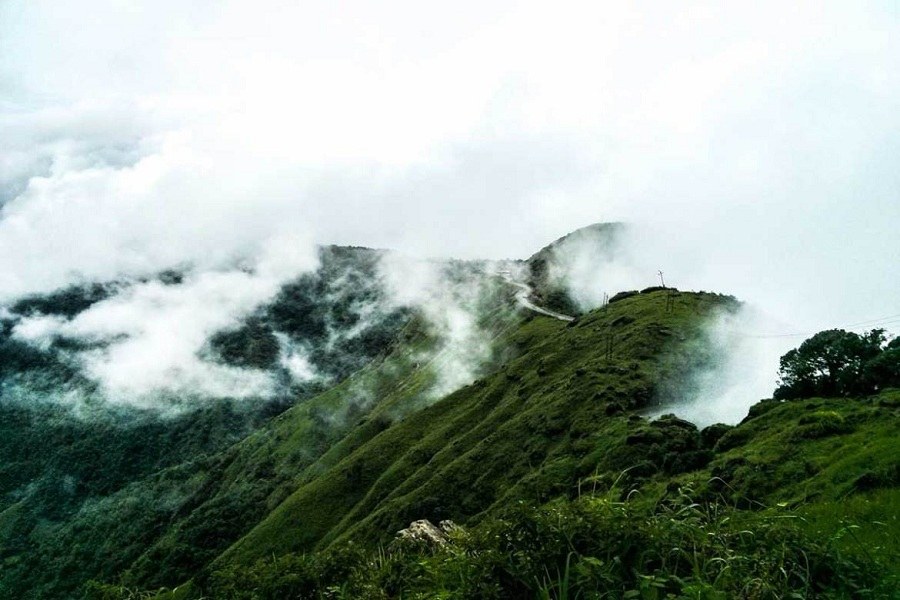 A little away from Shillong in Meghalaya lies a somnolent and scenic village, Mawsynram. Situated at an altitude of 1400 m in the East Khasi hills, Mawsynram is the wettest place in India and the rain lover’s paradise as it receives the highest rainfalls in India. With 11,872 mm of rainfall received annually, Mawsynram beats Cherrapunji by a slender margin. The abundant rainfall makes it one of the most beautiful places to visit during this pandemic. Apart from rains, Mawsynram is also known for lush green vegetation, floating clouds, roaring waterfalls, and colorful orchids. Mawjymbuin Cave, Mawlyngbna Village, and Jakrem are the top places to visit in Mawsynram. Also, Mawsynram is known for the secretly placed caves and the adventure sports activities. 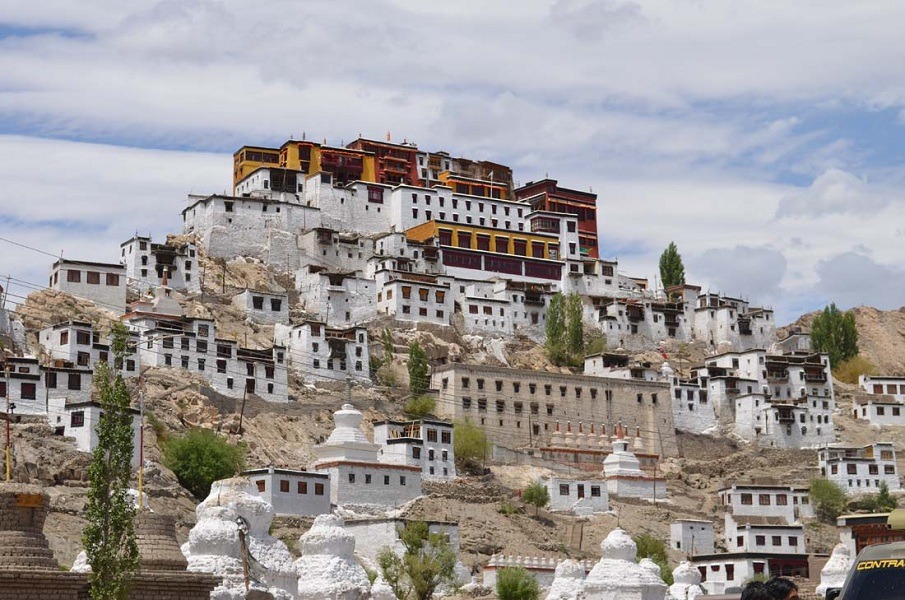 One of the lesser-known places in the state of Jammu and Kashmir, Hemis is a quaint
village located on the banks of the Indus River. Hemis is blessed with beauty,
bliss, and away from the touristy trails. Hemis is known for the Hemis
Monastery, one of the wealthiest monasteries in India. Built by the Ladakhi
king Sengge Namgyal, the monastery houses a spectacular copper statue of Lord
Buddha along with stupas made of gold and silver, thangkas, and murals. This
Himalayan village is also home to the Hemis National Park which houses the rare
and endangered snow leopard. 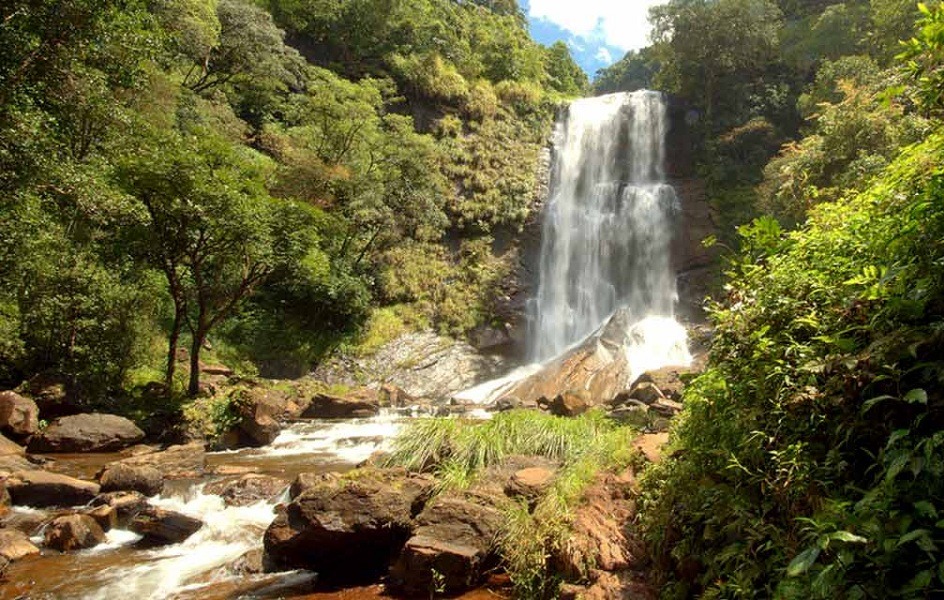 Situated in the Baba Budan range, Kemmangundi is quiet and secluded of all the hill stations in Karnataka. This quaint hill station is known for its breathtaking views of the valleys amidst mountain streams and lush vegetation. The region is covered with plantations of coffee and tea along with thick bamboo groves forming a dense forest cover. Raj Bhavan, Z point, Rock garden, Hebbe Falls, Kalhattagiri Falls, Baba Budan Hill, and Bhadra Tiger Reserve are the top places to visit in Kemmangundi as part of Chikmagalur Tour Packages. The sunset view from the Raj Bhavan is a photographer’s delight. At the same time, ideal as a base camp for treks that lead into the Baba Budan range of Western Ghats. Shanti Falls and Hebbe Falls are the two famous waterfalls located here that offer trekking opportunities. 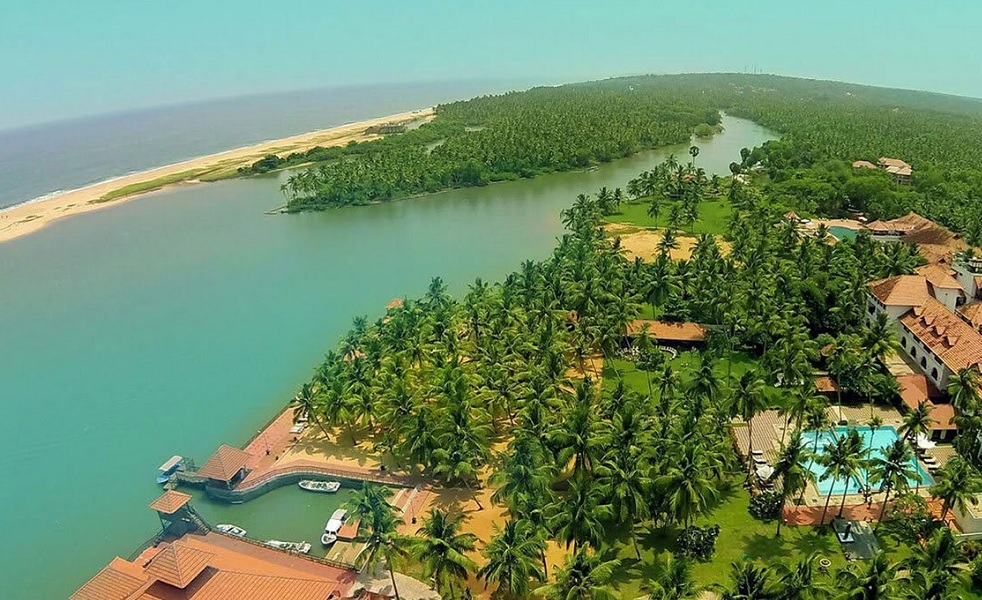 Away from the touristy crowd of Kovalam in Kerala lies Poovar, a small coastal town encompassed by a beautiful beach on one side and the backwaters on the other. It is one of the natural wonders where the Lake, River, Sea, and Beach meet the land. Poovar is a lovely island with long stretches of glowing sand, serene surroundings, and refreshing gentle breeze. Poovar is widely identified for its lovely Poovar Beach which serves as a major attraction for tourists. It is an ideal destination for relaxing and cherishing the exotic beauty of the beach as part of Kerala Tour Packages. 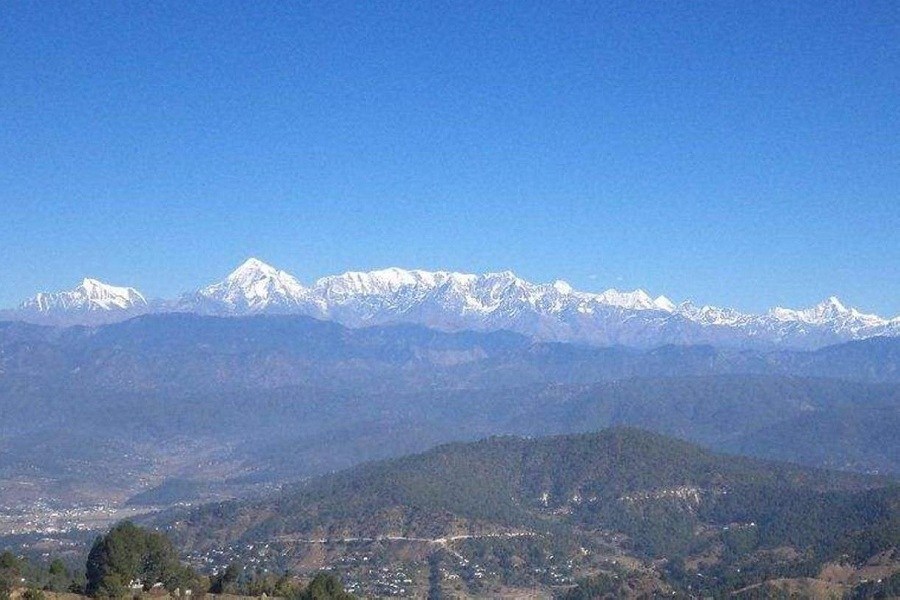 Kausani in Uttrakhand, the birthplace of the famous poet Sumitranandan Pant, is easily one of the most colorful destinations to visit during the COVID-19. Situated at an altitude of 1890 m atop the ridge between dense pine trees, Kausani overlooks the Someshwar valley on one side and Garur and Baijnath Katyuri valley on the other side. Described by Mahatma Gandhi himself as the ‘Switzerland of India’, this small hill town is known for its scenic splendor and its spectacular 300 km-wide panoramic views of the snow-capped Himalayan peaks like Trishul, Nanda Devi, and Panchchuli. Baijnath Temple, Kausani Tea Estate, Someshwar, Rudradhari Falls and Caves, Rudrahari Mahadev Temple, Kot Bhramari Temple, Bageshwar, and Pinnath are the popular tourist places in Kausani as part of Nainital Tour Packages. Apart from the hills and spectacular views, the place is famous for Anashakti Ashram otherwise known as the Gandhi Ashram, where one can find a small museum that contains Mahatma Gandhi’s photographs and his writings. 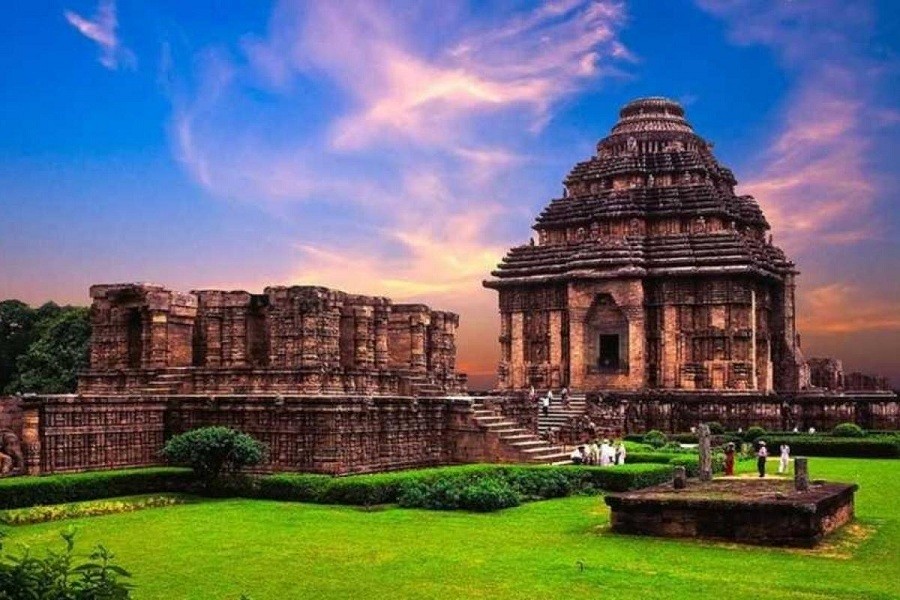 Konark in Odisha is a small historical town renowned throughout the world for the Sun Temple. Konark is one of the top tourist destinations in Odisha and also one of the popular places of heritage in India.  Also known as the Black Pagoda, the Sun Temple was built in black granite during the reign of Narasimhadeva-I. The temple resembles the mythical chariot of the Sun God and is a UNESCO World Heritage Site since 1984. The temple is now mostly in ruins, and a collection of its sculptures is housed in the Sun Temple Museum, which is run by the Archaeological Survey of India. Konark Beach, Ramachandi Temple, Kuruma, Astranga Beach, Varahi Devi Temple at Chaurasi, and Maa Mangala Devi Temple at Kakatapur are some popular places to visit in Konark as part of Orissa Tour Packages. Besides the magnificent Sun Temple, Konark is also famous for the Konark Dance Festival.

Santhi is an avid traveler and primary contributor to the blogs at Trawell.in. She has explored most of the states in India and gained vast knowledge on tourist destinations in India and abroad. She also contributes content to other travel websites.

Travel
Badrinath – the MOST COMPLETE guide

Travel
Gangotri – the MOST COMPLETE GUIDE

Travel
Yamunotri – the MOST COMPLETE GUIDE