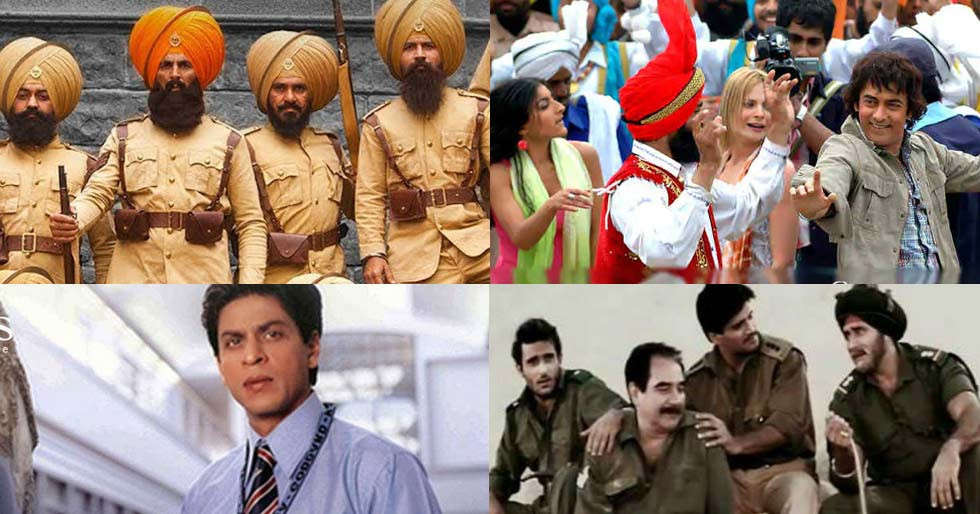 10 best patriotic songs from the ’90s till now

Patriotic songs have a way of making a room in your hearts. They get your blood hot, uplift your mood and set your feet marching. They make us one with the soldiers stranded at remote stations, guarding their motherland. Right now, when our country is beset with many calamities, we need a burst of patriotism to tide us over. We present the best patriotic songs from the ’90s onwards for your listening pleasure. We’re sure they’ll make you fall in love with your country all over again.

This is the song most of us have grown up on. It acquaints you with the turmoil the soldiers feel when the letters from home reach them. The memories of their loved ones engulf them but they suppress those feelings and stoically carry on their duty. They understand that their first and foremost equation is with their motherland. Everything else can wait. Javed Akhtar won a Filmfare trophy for writing the moving lyrics.

2. I Love My India
Pardes (1997)
Lyrics: Anand Bakshi
Music: Nadeem-Shravan
Singers: Kavita Krishnamurthy, Hariharan, Aditya Narayan & Shankar MahadevanThe sight of Amrish Puri singing the song with wholesome pride about his country radiating from his face is one of the highlights of the film. People don’t remember the context of the song but they still remember the song. It became a modern anthem of sorts for youngsters and became a de rigeur song in school functions. And is still going strong. Anand Bakshi saab mixed the modern with the ancient in his lyrics and wrote an evergreen song.

3. Rang De Basanti
Rang De Basanti (2006)
Lyrics: Prasoon Joshi
Music: AR Rahman
Singers: Daler Mehndi, K. S. ChithraThis bhangra-fusion of a song sung robustly by Daler Mehndi became a rage at the time of its release and is still very much popular. The song talked about how the five elements combine to evoke patriotism in every Indian. It had a patriotic fervour but had a fun element to it as well. Rahman’s orchestration, involving lots of bhangra beats and dhols, was something else indeed. One can’t help but shake a leg to the song.

4. Kasumbi
Parmanu (2018)
Lyrics: Vayu
Music: Sachin Jigar
Singer: Divya KumarParmanu: The Story of Pokhran offered a fictional account of the actual events. It told the story of the dedicated individuals who fooled the Americans and the Pakistanis and carried a successful nuclear test. Kasumbi talks about being coloured with the colour patriotism. The song grows on you with repeated listenings. Divya Kumar’s voice has done ample justice to Vayu’s engrossing lyrics. The song is definitely worth going back to.

5. Mera Rang De Basanti Chola
The Legend Of Bhagat Singh (2002)
Lyrics: Sameer
Music: AR Rahman
Singer: Sonu Nigam, Manmohan WarisSonu Nigam and Manmohan Waris outdid themselves singing this super-patriotic song. Rang de basanti chola from Manoj Kumar’s Shaheed (1965) is hugely famous and it wasn’t expected of them to surpass them but the duo came close to evoking the feelings of the original. Sameer too outdid himself writing the lyrics and kudos to Rahman for coming up with a totally different treatment from the original.

Laying down their lives for their motherland is the ultimate dream of true soldiers and that’s what gets encapsulated in this patriotic song. The soldier wants his nation to always be prosperous, to be safe and sound even at the cost of his own death. The song pays homage to the ultimate sacrifice of our soldiers and lays bare their love of the motherland.

7. Aye Watan Watan Mere Abaad Rahe Tu
Raazi (2018)
Lyrics: Gulzar
Music: Shankar-Ehsaan Loy
Singers: Arijit Singh, Sunidhi ChauhanAe Watan sung by Arijit Singh with additional vocals by Mani Mahadevan, Ravi Mishra, Binaya Mohanty, Arun Kamath and Arshad Mohammed. Arijit manages to touch the high notes brilliantly and the chorus ably keeps pace with him in this clarion call of a song. Unlike most patriotic songs, this one is more of a personal piece which tells you of the world view of the protagonist. It has a female version, sung equally well by Sunidhi Chauhan. The song encapsulated the film’s ethos in its lines and brought a lump to the throat of the listeners, given the context of the song in the film’s narrative.

The song brought forth the spirit of the Indian army. It spoke about its unity in diversity. The camaraderie and brotherhood between the soldiers that helped them overcome insurmountable odds. Of their dedication towards each other and their motherland. It spoke of shared laughter and tears and shared goals. It’s the ultimate anthem indeed for our jawans. Javed Akhtar captured the spirit of friendship between the soldiers superbly in his lyrics and Shankar-Ehsaan-Loy gave it a marching song feel through their composition.

9. Ye Jo Des Hai Tera
Swades (2004)
Lyrics: Javed Akhtar
Music: AR Rahman
Singer: AR RahmanIt’s said Rahman sings the most evocative song of his albums himself and this proved to be the case here as well. The song is important because it showcases the feeling of patriotism that engulfs the protagonist and compels him to let go of his well paying job abroad and come back to India in order to serve his motherland. The orchestration is kept to the minimal, as Rahman’s soothing voice teases out the nuances contained in the song. One can hear it on loop for hours on end and not get tired of it.

10. Challa (Main Lad Jaana)
Uri: The Surgical Strike (2019)
Lyrics: Kumaar
Music: Shashwat Sachdev
Singers: Romy, Vivek Hariharan, Shashwat SachdevThe song mixes the elements of Punjabi bhangra pop with hardcore rock to come up with a pulsating anthem about a warrior on the prowl. It’s a modern clarion call from a dedicated soldier stating his intent. He’s ready to fight for his country till his last breath, till his last drop of blood. He’s set for victory and doesn’t care if he dies fighting for it. He knows he’ll kill his enemies first.

Entertainment
Winning at becoming the ‘losers’ of the world

Entertainment
‘Ajay Devgn is a dream actor. His dedication and enthusiasm have gone a long way into making Maidaan the film that it is shaping into,’ says director Amit Sharma

Entertainment
The Power Movie Review And Rating {2.5/5}: Vidyut Jammwal-Shruti Haasan’s Film Is A Feeble Ode To The Godfather
© Blimpt 2020. All Rights Reserved